Crossing into Medicine Country: A Journey in Native American Healing

Crossing into Medicine Country: A Journey in Native American Healing

Crossing is the story of David Carson’s initiation as a conjure man—a ceremonial healer—with the Choctaw medicine woman Mary Gardener. For three years, he studied power plants and medicine animals, how to read the layers of energy surrounding human beings, and how to use sacred tobacco in ritual, curing, and divination. Through Mary’s teachings, often conveyed by the folk tales of the healer, Yellow Tobacco Boy, and through his own, often alternative experiences, Carson gives us a glimpse into a different reality, one in which health and illness express the balance between man and nature, and Western notions of physics do not always apply. A fascinating personal narrative, Crossing is a work rich in spirit and Native American folklore.

Excerpted and edited down from Crossing Into Medicine Country by David Carson, originally published by Arcade Publishing, now published under Skyhorse imprint, NY.

He took his problem to the water. He was facing a rushing stream. “Oh living one. Oh long one,” he prayed. “You are a great wizard. You fail in nothing you attempt. I am going blind. I ask the little green frog to help me. I ask Dragonfly and Mink. Now listen, there is nothing you can’t do. You promised my clan you would always help.”

As he was praying, he felt a strange presence but when he looked he saw nothing. His eyes were drawn to the ground, where there was a strange-looking plant he didn’t recognize. He turned back to continue praying.

In the middle of his prayer for good eyesight to return, he felt the presence again, and again he shifted his gaze to look. There stood a traditionally dressed Native girl. She was pretty, and she was smiling at him.

Thinking he had lost his mind, the old man stepped away from the child. She addressed him in the Choctaw language. “I can help you,” she said. “Bend forward and look me in my eyes.”

The old man, still in a state of bewilderment, bent and did as he was instructed. He was completely mesmerized by the little girl’s exquisite face and shiny black eyes. She stared at him intently. Suddenly, she spit in both of his eyes. The old man stumbled backward. He rubbed his eyes and blinked. It was as though a new light flooded the morning. By degrees, he began to see better. He stood up dumbfounded. The little girl was gone. Where she had stood was a wilted dead plant. 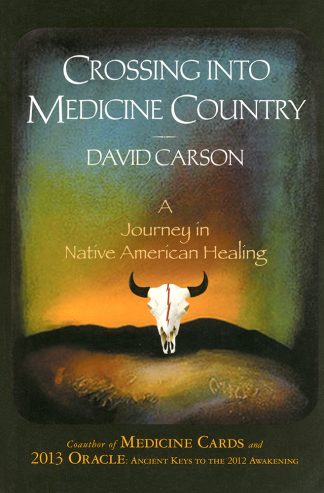 You're viewing: Crossing into Medicine Country: A Journey in Native American Healing $16.95
Add to cart

"COVID restrictions have affected worldwide shipping in various ways. These may include pricing and availability of shipping outside the US. Currently, we cannot ship to Australia or New Zealand because of prohibited shipping costs. We apologize for any inconvenience this may cause." Dismiss